Making A Website As A Cure For Writer’s Block

The Adventures of a First-Time WordPress User

As you may have deduced, this website is still in its infancy.  However, I already see some of the benefits that making this website offers to me as a writer,  and I’d like to share some of my observations on the subject with any writers out there who suffer from Writer’s Block.

The main reason I feel a burning urge to write this is that I’ve been in lots of writers’ workshops and I don’t think I’ve ever heard making a website recommended as a method of conquering The Dreadful Block.  I therefore wonder if this strategy may, in fact, be a novelty to some of you.  If so, I feel some urgency about sharing it.

Because Writer’s Block is horrid.

Some of the features that I have implemented so far on this site seem to have set up creative chain-reactions in my mind, causing ideas to give birth to other ideas, triggering explosions that expand into stories.  Starting off a chain-reaction such as I have just described is the only way I know of to defeat Writer’s Block.  Making a website gives one access to many tools that seem to contain explosions-in-potentia.

Here are some of the things that I’ve done so far that seem to set off the creative chain-reaction:

The first thing that thrilled me about the experience of making this site was the immediacy.  I type up a page.  I click “Publish.”  That page is now out there.  One can exit the page editor and look at what you’ve written- and see it as others will see it.  To a novice like me, this alone is inspiring.

2)  Making a Photo Gallery of Your Characters

I wanted to make a sort of online collaborative play, because Internet!!!

…If you see what I mean.  Anyway, I decided that I’d do a classic murder mystery, set during a house-party at a stately home.  I wanted to do this with all of the trimmings, so I started by making a photo gallery of the characters.

But where to get the images?

This may not be a viable strategy for all of you (guys with beards who have always had the same beard and people who don’t obsessively photograph themselves are two examples of people who probably won’t be able to do this), but I started by sorting through the many, many pictures I’ve taken of myself in Photo Booth over the last few years.  I looked for pictures of me that looked different enough from one another to pass as different people, but more than that, I looked for photos of me that seemed to express different personalities.

I put all of these pictures into a folder on my desktop.  I opened up WordPress.  I uploaded the pictures in the folder, and put them all in a new gallery.  I examined each picture, and decided who would be part of the immediate Atherton family (the project is called Murder at Atherton Manor), who was related more distantly, who wasn’t related at all, who was a guest, who was a servant… oh, and which pictures could pass for older than I am and which could pass for younger.  Anyway, I eventually had part of a family and some house-party guests (yes, most of the pictures in my gallery at this stage were female characters, but later I got crazy with some make-up, so there is more gender-balance now).  I gave each character a name.

… and then I started to write a little bio/back-story for each character.  I started with Lucy Atherton, because the picture I’d chosen for her conveyed something really important about her personality.  I mean, look at her. 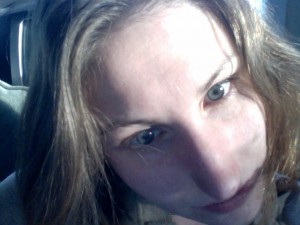 She’s obviously a lunatic.  I wrote her back-story, and after I had her back-story written up, I knew more about the other people in the story also.

You can, obviously, do this (or something like this) without making a website.  However, I really think that, somehow, putting the gallery into a web-format (or whatever- I really haven’t mastered the lingo) helps.

Anyway, after I’d written a couple of back-stories, lots of potential plot points for Murder at Atherton Manor were suddenly apparent to me.

The next thing I did that really got my ideas flowing was to create a Chat Room for Act 1, Scene 1.  I didn’t intend for it to be my own little Chat Fortress of Solitude, but actually, it was lots of fun to create a script in this way, and, for me, inspiring.  I’m not saying that my Act 1, Scene 1 of Murder at Atherton Manor is great writing.  It isn’t.  But it was remarkably easy writing; there was no struggle over the exact right word, no torment.  It flowed beautifully.  Except for the time when I accidentally lost a chunk of the script due to I don’t know what.  And the time when I somehow managed to put myself on the banned list for my own chat room.

My point is that the writing flowed.

I have no really good theories about why this worked so well for me.  Maybe it had something to do with that “Submit” button.  I’d write a chunk of the script and then I’d click “Submit”- and then I’d start writing the next chunk.  I felt no temptation to go back and edit the entries that I’d already published.  I was able to move on.

1)  Make a photo gallery.  Look at the photos, and allow your ideas about your characters to be influenced by the nuances you pick up from the photos.

3)  Chat Room your scene.  It doesn’t matter if you want to write a play or not- I am primarily a narrative fiction writer, and it seems to me that this exercise would be one of the best ways I can think of to develop your characters’ voices and plot out some of the story. Or you could use the chat text box as your paper and type your narrative directly into it.  Just remember to take a deep breath and click Submit at regular intervals.