Please Note:  Chapters 2 through 5 all take place at roughly the same time (or at least the times overlap to a considerable extent).  Soon, I will insert some further indication of this (for example, a clock tolling the hour in each scene); right now, keep your eye on Lucy; her walk ties Chapters 2 through 5 together.

A Question of Titles Between Friends – Nurse Is Still Missing – Lucy Goes For A Stroll – Geoffrey is Enlightened – Geoffrey Exits In A Hurry – Mr. Bysshe Meets His Destiny 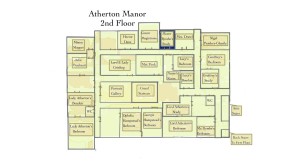 The Study of Mr. Bysshe

OPEN ON Richard Bysshe alone at his desk, speaking into the telephone.

Mr. Bysshe: Then I may inform Her Ladyship that you accept? Thank you, Miss Trueheart. The guests are to arrive this afternoon, so come any time now. Dinner is to be at seven. Good-bye.
MR. BYSSHE HANGS up and makes a note on a paper.
ENTER GEOFFREY.
Geoffrey: I say, Richard, seen anything of Nurse today?

Mr. Bysshe: I have not, My Lord.
Geoffrey (Annoyed and Embarrassed): Oh, cut out that title guff. It makes me all hot and prickly, you My Lording me. I mean, we were up at Oxford together. Dash it.

Mr. Bysshe (With Emphasis): Sorry, My Lord, but you’ll just have to lump it. If I get out of the habit of My Lording you, My Lord, Her Ladyship your mother will have me out on my ear. There are reasons why I cannot allow that to happen. My Lord.  (Pause)  What was that about Nurse Grimsby?

Mr. Bysshe:  Worried about what, My Lord?
GEOFFREY SHUFFLES closer to Mr. Bysshe.

Geoffrey (lowering his voice slightly):  Well, you see, I’ve just been to Nurse’s room. Richard, if she did leave, she left most of her things behind her.

Mr. Bysshe: Oh? Well, then, she’ll no doubt be back. Lucy must have gotten it wrong. Perhaps they had a quarrel and Nurse went off somewhere to recover her temper. Still… (he looks worried)

Geoffrey: Precisely. Still. Couldn’t have put it better myself.

LUCY PASSES in the hallway behind Geoffrey. She is dressed in a bright red Mack. Mr. Bysshe sees her and opens his mouth as if to speak, but she puts a finger to her lips and smiles. He shrugs. She passes out of sight. Geoffrey turns, but he just misses seeing her.

Geoffrey: I say, is the jolly old Atherton ghost actin’ up again? Rum sort of noises in the hall.
GEOFFREY CLOSES the door.

Mr. Bysshe: I warn you, My Lord, that that door won’t stay closed. It never does, in wet weather.

GEOFFREY SHRUGS.  He is restless and on edge, and his movements are a bit jerky.

Geoffrey: Speakin’ of Rum Doings At The Old Family Home, Richard, why on earth is the Mater having this house party?

Mr. Bysshe (In Professional Secretary Mode): It is the season for such gatherings.

Geoffrey: I say, have you been readin’ a book on etiquette, deportment, and whatnot? Because I don’t mean to disconcert you, old bean, but if so, your book is a touch out of date.

Mr. Bysshe: I have noticed, My Lord, that many practices, though labelled dead by the fashionable, yet continue to be practiced. Especially in rural districts. In London, perhaps, the house party at the end of the marriage season is considered an anachronism. Out here, it is still a reality.

Geoffrey: You always do talk like a novel when you’re dodgin’ an issue, Richard. You know Mater isn’t acting as agent for love’s young dream. I grant you that some young persons are on the guest list. But who could she possibly wish to marry to whom?

Geoffrey: Capital! Exhibit A.
GEOFFREY AND Mr. Bysshe bend over the list.

LUCY PASSES behind the two men.  She is walking along the ledge outside the window behind Mr. Bysshe’s desk. Her red Mack is dramatic against the stormy background. Her hair is wet and bedraggled. She walks with exaggerated caution- one gets the impression that she has been using this route ever since she was a child.

NEITHER GEOFFREY nor Mr. Bysshe notice her. They are both bent down, reviewing the list on Mr. Bysshe’s desk.

Geoffrey: If you can show me one suitable match on this list, I’ll give you a fiver. Or rather (he searches his pockets) one pound, seven shillings and six.

Mr. Bysshe (quietly): Geoffrey, old man, you are about to have rather a rocky time of it. I wanted to warn you, you know, but I couldn’t just tell you. Your mother is my employer, and there is such as thing as professional deportment and so on.  (Mr. Bysshe shrugs)  You see the awkward position I am in.
Geoffrey (obviously thinking so hard that he is barely aware of what he is saying): Yes. Oh, yes. Certainly. Jolly good.

GEOFFREY SHAKES himself out of his daze.

Geoffrey: Jolly bad. I still don’t quite grasp it.

Mr. Bysshe (patiently, like a teacher helping a struggling student to follow a line of thought to its logical conclusion): You see that Miss Trueheart’s name is the last name on this list.

Mr. Bysshe: You see that her name is listed after Miss Moppet’s.

Geoffrey: Yes.
Mr. Bysshe: The ink with which I wrote Miss Trueheart’s name is still wet.
Geoffrey: Yes. That is what puzzles me. (He thinks, clutching his head)
Geoffrey: Got it, by Gad! You are trying to tell me that Miss Trueheart wasn’t invited until I told the Mater that I’d invited my Mimsy.
MR. BYSSHE applauds.
Mr. Bysshe: The boy can reach a conclusion, provided you get behind him and shove.
GEOFFREY LOOKS briefly pleased; this is obviously an inside joke from their school days, and it makes him happy to hear his old friend sounding like himself again. Then his face clouds over. He sinks into a chair and buries his face in his hands.
THE DOOR pops open. Geoffrey is so sunk in gloom that he doesn’t notice. Mr. Bysshe gets up, closes it, and leans against it.
Geoffrey: Awful part is. One of the awful parts. There are so many, lining up like bally soldiers. One I’m thinkin’ about now is the one the Mater sort of brought to my attention. On purpose. Damn her. Damn damn damn her to bloody hell. (His voice gets louder as he rambles. His fists are clenched. He starts to punch his thigh, rhythmically at first, then forcefully, with rising violence)
Mr. Bysshe (his voice is low, hissing, and tense): Keep your voice down, blast you. Think of my position. Get it into your thick head that this conversation has to be kept private. My Lord.
GEOFFREY LOOKS up, dazed.
Geoffrey: I don’t- oh. Yes. Secretary. Right. Right. Don’t get why that matters so much to you. Hard up, I suppose. My own problems not the only problems in this bally morgue. I’ll try to remember that. Tricky, though. Own problems always loom, what?
Mr. Bysshe: I think we could use some tea. (He moves towards his desk)
Geoffrey: Oh God, don’t do it. I couldn’t take it. Havin’ old Sneakfork see me like this.
Mr. Bysshe grins and pulls out a drawer. Geoffrey smiles.
Geoffrey: You still have the doings, eh? Like good old days, what? I suppose we couldn’t cook up some bloaters. Good old Richard.

MR. BYSSHE pulls out a kettle.  There is a banshee scream from offstage, and the noise of someone clattering upstairs.  Ophelia’s voice is heard, coming closer, calling for Lucy.

ENTER LUCY, dripping wet.  She lets out a single banshee scream and runs out again.  EXIT LUCY.  GEOFFREY runs after her; EXIT GEOFFREY.  MR. BYSSHE starts to follow him, and runs smack into OPHELIA, (ENTER OPHELIA) who has run into the room.  They both fall to the floor.

Ophelia:  I am frightfully – are you all right?

Mr. Bysshe:  (smiling) I am frightfully also. (Formally) I am quite uninjured.  (He gets to his feet and helps her up).

Ophelia:  I was chasing Lucy.

Mr. Bysshe:  Yes.  I could see that you were.  (He helps her to the chair recently vacated by Geoffrey)  Please do sit down.  I don’t believe we have met.  I am Richard Bysshe, Lady Atherton’s secretary.  And you must be Ophelia Hampstead.

Ophelia:  Indeed I am.

THOUGH this exchange is correct, Mr. Bysshe has obviously fallen immediately in love with Ophelia.  Ophelia is not unaware of this, and is regarding Mr. Bysshe with a certain wary interest.

Ophelia:  Should we not pursue Lucy, Mr. Bysshe?  She is behaving- rather alarmingly.

Mr. Bysshe:  Oh, I shouldn’t think so.  Geoffrey- that is, young Lord Atherton- has taken up the chase.  He was a dashed good dasher on the straight at Oxford, and I think he can be trusted to catch up with Lucy on his own, what?

Ophelia:  You were up at Oxford with Geoffrey?  (OPHELIA’S gaze becomes yet more considering at this revelation of Mr. Bysshe’s suitable social position; she settles in to her chair and smiles slightly)  Do tell me of Oxford, Mr. Bysshe.  I love hearing that sort of school story.

MR. BYSSHE smiles shyly and waves his kettle at Ophelia.

Mr. Bysshe:  I would be honored, Miss Hampstead.  But first, shall I make us some tea?

Ophelia:  That sounds rather jolly.  Yes, please do make us some tea.

THE LIGHTS fade out on Mr. Bysshe and Ophelia, smiling cozily at each other.

On To Chapter Three!

Back To Table Of Contents