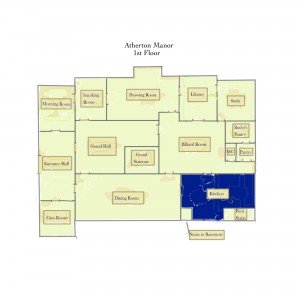 Mrs. Burnstone, the cook, is at the massive stove, stirring something in a massive pot with a massive spoon. She hums quietly to herself, or that is what she’d call the noise she makes. It is more like a high-pitched whining buzzing.
ENTER SNEAKFORK, heavily. He sinks into a chair that is clearly his own particular chair, placed in the kitchen for his own particular self to use when having a chat with Mrs. Burnstone.
MRS. BURNSTONE nods regally at Sneakfork when he enters, as one royal personage to another, but otherwise goes on with her cooking.

Sneakfork:  You have said a true word there, Mrs. Burnstone.  She is machinating like anything.  Why, do you know who she’s gone and invited now? (Sneakfork leans back, obviously savoring the imparting of this juicy tidbit).

Mrs. Burnstone: What, today?  I ‘aven’t ‘eard anything new from them (she jerks her thumb ceiling-ward) about our la-di-dah ‘ouse of ‘orrors of the weekend.  Who’s ‘er nibs’s newest lamb to the slaughter?

Sneakfork: Ms. Julia Trueheart, from across the way.

Mrs. Burnstone:  Lady Atherton is ‘aving… but don’t she know that Miss Mimsy person’s going to be here?  Or ‘asn’t my lord Geoffrey told her yet?

Sneakfork:  Oh, she knows, Mrs. Burnstone, she knows.  Made a terrible to-do about it, she did, too, and I can’t say as I blame her overmuch for that.  Miss Mimsy Gawdhelpus isn’t precisely the ticket, for a lord.  Or even for a gentleman of a lower rank in life, like.

Mrs. Burnstone:  you sayin’ you wouldn’t ‘ave ‘er yourself, like?

Sneakfork (stiffly):  Are you implyin’, madame, that a butler is of a lower rank than a bleedin’ lord?  (He snorts derisively)  Why, Sneakforks have been here longer than Athertons, at least this branch of the family, which is decidedly cadet, considered in terms of succession.

Mrs. Burnstone:  oh, stop!  Aren’t you one for fancy airs?  But nevermind that; what I wanna know is, what on earth is Lady Atherton playing at, ‘aving them two females here together.  They’ll tear each other’s eyes out, they will, and drive young my-lord Geoffrey to distraction.  Oh!  Well, I am blinkered today.  That is what you might call the point of the exercise, ain’t it, Mr. Sneakfork?

Sneakfork:  Mrs. Burnstone, I fear so.  Lady Atherton is up to her ears in plots.

Sneakfork:  Except, Mrs. Burnstone, in, as you might say, the degree.  The mistress usually takes her plots one at a time, like.

SNEAKFORK is silent for a moment, obviously thinking furiously.

SNEAKFORK pauses again; he is having a little trouble putting it into words.  He looks around the kitchen and seems to get an idea.

Mrs. Burnstone:  Can’t say as I follow that, Mr. Sneakfork.

Sneakfork:  Well, when you make a meal, you make lots of dishes separate; you don’t cook the fish course and the salad together.

Sneakfork:  Well, that might be as how Lady Atherton is plotting.  This house party may be lots of plots, not specially related-like, coming together like a dinner comes together, only because each dish gets finished off and is put on the same table.  Or.

Sneakfork:  Or it might be one big plot.  Like one of your admirable soups.  Each plot mingled together, meant for the same pot.

Mrs. Burnstone (slowly):  I see.  (SHE TURNS to stare at Sneakfork in horror).  Fair gives me the shivers, that does.

LUCY bursts into the kitchen.  She is dripping wet and running.  Mrs. Burnstone drops things with a clatter; Sneakfork half-raises himself from his chair, positively gawping.  Lucy takes no notice; pausing center-stage, she lets out a single, banshee scream; she then continues on her way, exiting on the other side of the stage.  Noises of her ascending the back stairs.

Sneakfork and Mrs. Burnstone look at each other with a wild surmise.

Wordlessly, Sneakfork nods towards the back stairs.

Ophelia (formally):  Thank you, Sneakfork.  Mrs. Burnstone, I hope you have not been too much upset in your arrangements.

EXIT Ophelia; again, the noise of someone running upstairs.

Mrs. Burnstone:  I ‘ave to say, Mr. Sneakfork, that this ain’t good service.  (She shakes her head, ominously).

On To Chapter Six!

Back To Table Of Contents!